Graphical objects of type "Text", "Line", "Arrow", "Rectangle" and "Circle" can be bound to existing data points in a graph. In that case, they don't have a fixed position in the document anymore, but are instead positioned relative to that data point. This means that they will move alongside the data points as well as be hidden from view alongside it.

In order to access this functionality, select "Bind new objects to data point" in the context menu of a data point:

Doing so will mark that data point with a red symbol to help you remember that object binding mode is active and to which data point. While in this mode, creating any of the aforementioned objects will automatically bind the them to the marked point, and their relative position on creation is kept when the point is being moved.

It is also possible to retroactively bind existing objects to data points. Simply enter object binding mode and open the context menu for the existing object:

With this feature, it is possible to adjust old documents for this feature or just create objects first before having to select a data point to bind to.

The edit dialog for the text object now shows the data point it is bound to, read-only:

If an object should no longer be bound to a data point, you can select "Drop binding to data point" in its context menu: 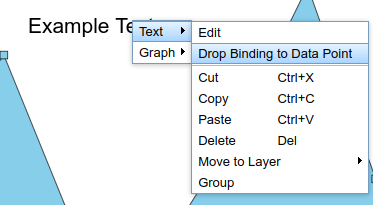 Using this, it should be easy to switch objects between bound and unbound state if so desired.