In TISGraph, documents can be exported to PDF format, or alternatively into PNG image files. The exported PDFs confirm exactly to the drawing pane of that document. This means that adjustments down to millimetre scale are being transferred over to the PDF.

Internally, printing in TISGraph simply refers to the subsequent step of printing the exported PDF. Because of this, exporting and printing are considered the same for the rest of this manual page.

Additionally, TISGraph includes easily extensible multi print functionality. Conforming to modern standards, it is capable of exporting documents into a series of equidistant timestamps. A real-world example for this would be the segmenting of a year-long report into 12 pages each containing the respective month's data.

For the purposes of archiving or diagnosis, it is also possible to export (and import) TISGraph internal XML documents.

Images can also at any time be imported into the document database, or exported from it.

TISGraph can export documents in the following file formats:

Additionally, images of various different formates can be imported, and exported again. They can also be used for geo referencing.

For the rest of this manual page, we will differentiate between:

Exporting of TISGraph documents is available under the menu point File → Export. You are prompted to choose between exporting into a vector graphic (PDF), a pixel-based image (PNG) with the selected resolution, a scalable image (SVG), a XML file for importing into another (or the same) TISGraph instance, and a ZIP file which contains both the document XML and all image files embedded in it. Non-document files such as images can only be exported in the exact same state as they were imported in. 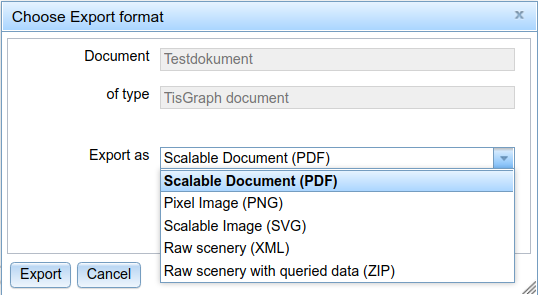 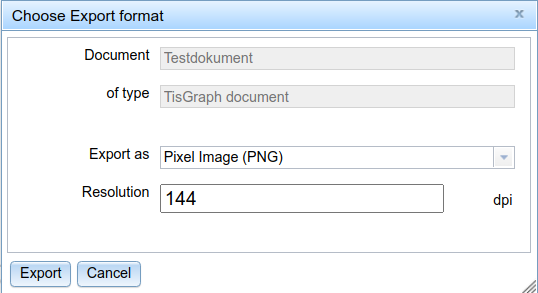 Printing TISGraph documents can be done under the menu point File → Print. As mentioned above, printing is equivalent to first exporting to PDF and then printing the result. After rendering has been completed on behalf of the server, the browser will try to open a popup for printing (potentially this needs to be allowed in browser settings first, see the browser's manual for more help). If working correctly, a print prompt should pop up afterwards.

Printing always takes the document in its current state in the drawing pane as the input, even if there are unsaved changes.

The range of data shown in TISGraph graphs, tables and other data containers is typically determined by the current observation range. It might for instance be set to "01/01/2014 - 01/02/2014" (in DD/MM/YYYY format) to show data for the month of January 2014. In order to print multiple months (or other such time units), multi print functionality may be used. It can be found under the menu point File → Multi Print, which will open the following dialog: 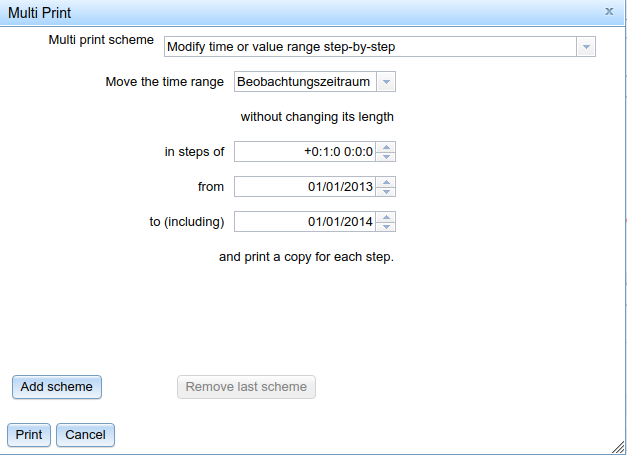 You can select one of the configured observation ranges to multi-print, alongside specifying the duration of the interval (step) to be compiled into PDF pages. The time format of the duration input field is Year:Month:Day Hour:Minute:Second.

In the above example, confirming these settings will generate and subsequently try to print an ordered 12-page PDF, each representing a month in the year 2013. This is because the time range set in the "in steps of" input field is set to 1 month.

To illustrate, in the provided example: